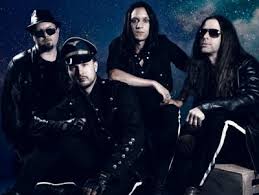 The Melodic Rockband CAPTAIN BLACK BEARD has been around for a while and as their new album is quite strong, we decided to catchy up with bassist Robert Majd...

When did you decide to call your band CAPTAIN BLACK BEARD?

About a week after I met the other founding members of the band. We had a gig but no name so it was a bit rushed maybe.

How come that Sweden is such a breeding place for melodic rock/aor music, is in your blood? (I call it the  New Wave Of Swedish Melodic Rock (NWOSMR) movement)

I like that name. I think there's always been great music made here it's just easier to get good equipment nowadays. Also, when you see great bands emerging from your country, then you might get inspired to give it a try yourself.

Which acts did directly influence you to create your melodic rock?

KISS has influenced me immensely but there's a little bit of all the bands that we listen to. Lately maybe Rainbow, Michael Schenker, Beast In Black, Night Flight Orchestra, Mother's Finest and H.E.A.T.

You switched singers a few times, is Martin now the permanent lead singer?

How does it look like now these days, your personal lives due to the corona virus?

Less actual work but still super busy. We're promoting the new album, starting to write music and we also just launched a fan club with a fanzine and all. Please check it out at www.captainblackbeard.bandcamp.com

That is also the place where you order the limited edition vinyl of "Sonic Forces".

What are your favorite songs to play live?

At the moment, I miss them all!

Can you tell us all about your new album? How did the recording process go and any interesting stories to tell?

We recorded the album in Stockholm with producer Dave Dalone. We started without a singer and hoped we'd find one along the way. The album was almost finished apart from lead vocals when we finally got Martin. I wouldn't recommend working that way but it turned out great.

This time the guitarist from H.E.A.T. produced it, why the switch from their keyboardplayer to the guitarist or was this just a matter of coincidence?

Initially we were going to work with Jona Tee again but he was too busy when we wanted to start. He suggested Dave and after a meeting to see if we could agree on a vision for the album, we got started.

Finally, some short questions to answer so we can get to know you guys a little bit better (if possible pls let all the members of the band answer these questions):

Besides AOR what other music you are listening to? Any song that is good. Rock, pop or metal doesn't matter.

Finest moment in your life (can be anything, not specifically something musically speaking): Birth of my son.

Other interests besides music? Sports, movies & beer... travelling. But there's a lot of music!

Best record of all: Dream Theater - Images and Words

Listening to: Progressive metal like Myrath, Symphony X and Dynazty

- Best record of all times?

- Besides AOR what other music you are listening to?

As a kid I saw Mora Träsk, a Swedish kids show with rock'n'roll! First large concert was AC/DC.

- Finest moment in your life (can be anything, not specifically something musically speaking):

Beer in (almost) any form!

- Other interests besides music?

Twisted Sister - Stay Hungry or KISS - Lick It Up, could also been Accept - Metal Heart

- Best record of all times?

"Sonic Forces" or another great record, there’s a lot of good albums.

- Besides AOR what other music you are listening to?

- Finest moment in your life (can be anything, not specifically something musically speaking):

Whatever is available with alcohol, mostly red wine or beer.

- Other interests besides music?

Thanks for the interview and good luck with this great new Melodic Rock/AOR album!

Thank you so much!